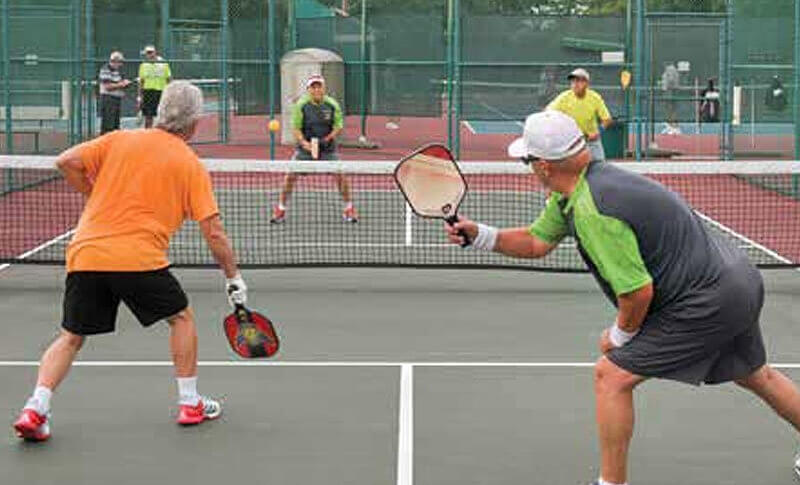 THE VILLAGES — Pickleball. Come on, is that a serious sport? In a word: Very.

But what a name. More on that in a minute.

The Sports and Fitness Industry Association estimates up to 2.8 million people play nationwide. In The Villages, a central Florida retirement community, thousands play. Pickleball is a genuine hometown sport there.

“We’re seeing the transition of a game to a sport,” says Justin Maloof, USAPA’s executive director.

The number of participants nationally has leaped 425 percent during the past five years, Maloof says, and the number of locations where pickleball is played grows at a rate of 92 per month.

“Until you start playing it, you don’t appreciate how addictive it can be,” says Drew Wathey, USAPA’s director of recreational programs.

Pickleball has flourished in Florida. USAPA lists more than 30 major centers scattered from the Panhandle to Key West.

The Villages is a stronghold, which is no surprise. The community, with an estimated population of 115,000, is renowned for its athletes and the variety of sports they play. Think softball, golf, swimming, track and field, archery, and tennis, for starters. There are many more.

“We even have cheerleaders,” says Glenn Kaye, a resident recently inducted into the Broward County Sports Hall of Fame, honoring his 50 years as a swim coach. For two of those years, he coached The Villages Aquatic Swim Team.

Steve Richter teaches pickleball there. “Villagers pride themselves on being and staying in shape, and sports play a major role in allowing and promoting them to do so,” he says.

John Rohan, The Villages recreation director, agrees. “With our … weather, residents get to play their favorite sport all year long.”

The Florida Senior Games is geared toward athletes who are at least 50 years old. In the statewide competition held late last year, The Villages contingent snagged 418 individual medals, including 168 in swimming and 59 in track and field. Some athletes were in their 80s and 90s.

At The Villages, you can watch polo or learn to play the equestrian sport through lessons.

Thousands of the community’s residents play it, Rohan says. “We have over 180 courts and growing.”

Resident Dennis Sarlo has been playing about 10 years, which coincides with the length of his residency in The Villages.

“I never heard of the game until I came down here. I just started like anyone else, more curious than anything else,” says Sarlo, 70. Now he plays every day. “It just became so exciting, it’s just a fantastic sport,” he said.

Pickleball originated a half-century ago on Bainbridge Island, Washington. Three men, including former U.S. congressman Joel Pritchard, devised the game. The trio wanted to play badminton, but couldn’t find the equipment. So they improvised with ping-pong paddles and a perforated plastic sphere known to generations of Americans as the Wiffle Ball. And whack! The game was afoot.

It caught on fast.

Friends and neighbors of the original three started making their own paddles, using jigsaws and plywood. They set up courts in their driveways and backyards.

Anybody could play. Grandmas took on their 9-year-old grandsons. Middle-aged cousins four times removed got reacquainted on the courts.

The courts, by the way, are about half the size of a tennis playing area.

Word spread. USAPA organized in 1984 to advance the game nationally. By 1990, it was being played in all 50 states.

Curious aerobics devotees and hardcore badminton players saw this upstart sport in community centers, the local YMCAs, and even in phys ed classes.

They watched the bright yellow orb, three inches in diameter, an ounce in weight, and still looking like the old-school Wiffle Ball. It wasn’t long before they wanted to smack it. “The play is pretty mesmerizing at times,” Wathey says.

According to the USAPA website, the sport is exploding worldwide. International clubs are sprouting, and national governing bodies have been established in Canada and India. There is a movement to introduce to youngsters what has been viewed as a retiree’s pastime.

The game is regarded as not as fast or strenuous as tennis, but quick enough to keep you moving and requiring laser-like focus. You don’t have to be a great athlete to play. Good hand-eye coordination and decent footwork are helpful. And it doesn’t take long before a newcomer can play comfortably.

“I can take a raw beginner and in 30 minutes they are successfully hitting the ball back and forth, sustaining a rally,” said Richter, the instructor.

It’s also relatively inexpensive to get started. You can get a serviceable, new paddle for $30 or less (although the best models can cost $100 or more). A three-ball pack might run you 10 bucks.

As for the origins of the name? Two narratives compete. The most widespread (and popular) says the game was named for Pickles, a cocker spaniel belonging to the Pritchard family.

But family members have said Pickles did not arrive until two years after Joel Pritchard and friends started the game. Joel’s wife, Joan, wrote a newspaper story some years ago in which she said the name actually came from a maritime term: the pickle boat.

In the sport of rowing and in a herring fishing fleet, the pickle boat is usually the slowest. In humorous fashion, Joan Pritchard seemed to suggest the early players were reminiscent of those aboard such craft.

Whatever the truth, pickleball is a great name — and those who play today love their great game. Get Acquainted with Danielle Allen