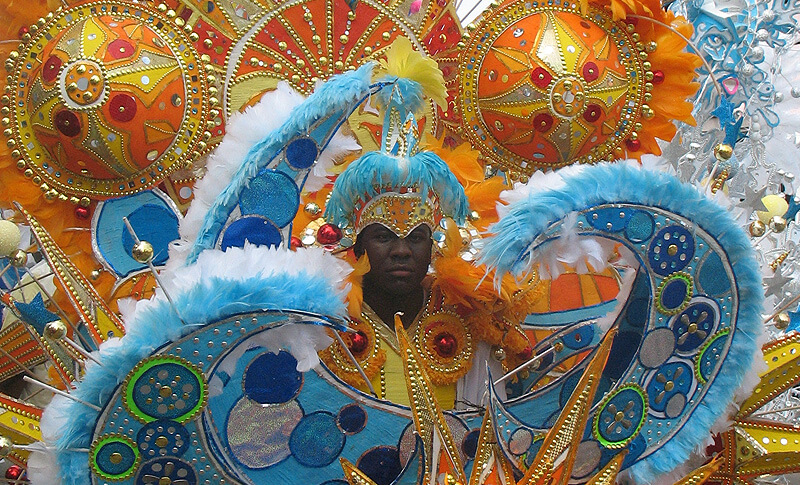 The bright colors, the loud clinking of a cowbell and the rhythmic beating of drums surround your senses as the music of celebration known as Junkanoo passes by. Held in select cities like Key West, Coconut Grove, Tampa, and Tallahassee, Junkanoo symbolizes the heart and soul of the Bahamian people. Originating from their spiritual African roots, Junkanoo celebrations began after Bahamian immigrants moved to Florida in the 19th century and early 20th century, primarily for economic reasons.

The origins of Junkanoo has been widely debated by multiple academic scholars. Dating back as far as 200 years ago, Junkanoo, sometimes known as John Canoe, John Konnu, John Konny, or Johnkankus, began as a celebration by slaves after their British overlords granted them three days of freedom for Christmas. The slaves, comprised of native Bahamians, West Africans and those from the Congo, celebrated by singing, drumming, and dancing.

Over the many years Junkanoo has evolved into a national form of identity. Every Boxing Day (December 26th) and New Years Day, thousands of Junkanooers, dressed in different eye-catching colors, join together to play a variety of instruments such as tom-toms, hand-welded cowbells, bicycle horns, fog horns, and whistles. By 1976, a brass section was added to replace the earlier use of conch shells and bugles.

One of the most important instruments of the celebration are handmade goat or sheep skinned drums. Each drum is tuned by the heat of open fires. Unfortunately, open fires aren’t necessarily accepted everywhere in Florida, so Floridian Junkanooers sometimes use electric heaters and small grills to substitute the fires.

Junkanoo has become increasingly popular to a point that it was included in sporting events, for example, the 2001 Superbowl XXXV in Tampa and a Dolphins game in 2003.

Celebrations occur in different cities all over Florida during different times of the year: Coconut Grove in June, Key West in October, Miami in December, and West Perrine in January for Martin Luther King Day. The different times allow for Junkanoo musicians to attend both Floridan and Bahamian celebrations.

Junkanoo is also know for their colorful and fantastical costumes. Usually all handmade, the costumes contain jewels, feathers, sparkles and bright, bright colors. Both men and women wear the same type of style, a headpiece, a shoulder piece, a top and a skirt. When this tradition met American culture there was some conflict with American gender norms. Males were hesitant on wearing skirts or light colors such as pink or baby blue.

Junkanoo music is most common in Florida during parades. Most don’t know that Junkanoo music is not amplified, so listen closely when near the parade. Junkanoo celebrations also follow their own pace, so they are intentionally left at the end of parades.

Despite these issues, Junkanoo followers and musicians play and dance with the same passion as those in the Bahamas. They wish to share the love and pride they have in their unique culture with those around them.

Fun Fact: K.C and the Sunshine Band started out as a Junkanoo-Rhythm and Blues mashup band.