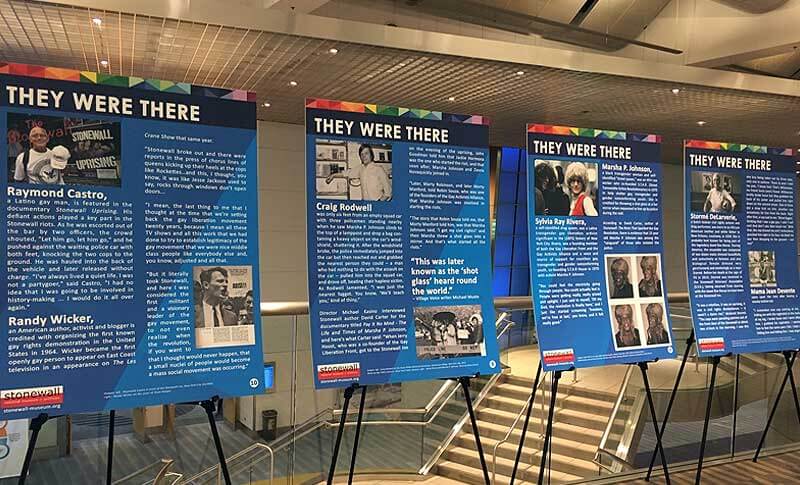 Stonewall: 50 Years in the Fight for Equality

In 1969, a series of spontaneous, violent demonstrations by the lesbian, gay, bisexual and transgender (LGBT) community against a police raid, took place at the Stonewall Inn, in New York’s Greenwich Village. In celebration of the 50th anniversary of the pivotal Stonewall Riots and supported in part by a vital $5,000 Community Project Grant from Florida Humanities, the Stonewall National Museum and Archives presented Stonewall Uprising – 50 Years, a major exhibition of photographs, videos, artifacts, and a lecture by gay rights’ activist, Mark Segal. Through a major exhibition and series of cultural programming, Stonewall National Museum & Archives presented a look at those pivotal events and the 50 years since in the nation’s history surrounding LGBT equality.

For many LGBTQ people, the battle for equality begins when they wake. Self preservation equates to sheathing oneself in a feigned identity of normalcy, or “straight”, simply to walk among their peers, go to work, or enjoy a family dinner. As recently as the 1960’s, homosexuality was illegal in 49 states, with punishments ranging from heavy fines to imprisonment. Whether the demonization of gay love arose from religious condemnation, illegality, or simple misunderstanding did not matter; life as an LGBTQ person in the United States was defined by a wretched concealment of oneself for survival. Often with their lives under siege even within the walls of their own family homes, gay bars offered a safe haven for self-expression and a rare opportunity to congregate with others who understood and would not seek to change one another.

It was within one of these safe havens, a gay bar called the Stonewall Inn, where the LGBTQ liberation movement was officially born. On a muggy night in late June 1969, nine police officers ascended upon the bar for a routine raid. They sought to arrest patrons of the bar, as well as bartenders, for violations related to “soliciting homosexuality.” In a twist of fate that would inspire human rights movements to this day, people fought back. “What are we going to do about our horrible treatment?” evolved from a question to an action and bricks were thrown, fires were lit, and gay voices refused to be silenced.

Stonewall Uprising – 50 Years, which detailed queer life before, during, and after the Stonewall Riots, attracted a diverse audience, with over 1800 visitors flocking to witness and discuss the exhibit. With the overarching goal of creating deeper community connections through communication and education, the exhibit effectively kindled visitor discussion, provided cited research to paint a clearer picture of the Stonewall Riots, and re-established the notion that progress comes in many forms.

According to the Stonewall National Museum and Archives Director of Development Monique Force-Setlock, “By creating opportunities for people to engage and learn in a safe environment, the museum successfully created opportunities for better understanding among diverse groups – highlighting the impact that the Stonewall uprising had 50 years ago and continues to have today. The exhibition and presentations were effective programs for disseminating factual, well-researched, and sited information about what happened those historic evenings. The exhibition also helped to dispel some myths that have developed around the Stonewall uprising as a rallying cry for the LGBT movement in the 50 years that have passed.”

Following the great success of the exhibit and fueled by the vital need for continuing education on topics of oppression and LGBTQ rights, the Stonewall Museum and Archives redesigned the exhibition into display panels with photos and text. As part of a project funded by Wells Fargo Bank, in partnership with CenterLink: the Community of LGBT Centers, and Florida Humanities, the exhibition will be loaned for exhibition at LGBT Centers in up to 19 cities until January 2021.

About the Partner Organization:

The Stonewall National Museum and Archives (SNMA) is one of the largest gay archives and libraries in the United States, now almost 50 years old and is a safe, welcoming place that inspires and promotes understanding through collecting, preserving and sharing the proud culture of lesbian, gay, bisexual transgender and queer people of all stories, and their significant role in American society.  SNMA presents an ongoing 12-month schedule of exhibitions on LGBTQ themes and public programs, including author presentations, films, panel discussions, and collaborative events at its museum and library in South Florida and in cities across the United States.

“Our Stonewall 50 Exhibition was a great opportunity to show how an archive, library and museum can tell important stories of the human condition. Through this exhibition, we focused the public on the impact of the Stonewall demonstrations of 1969. It inspires everyone to work toward building a more positive society.”

“Our Stonewall 50 Exhibition was a great opportunity to show how an archive, library and museum can tell important stories of the human condition. Through this exhibition, we focused the public on the impact of the Stonewall demonstrations of 1969. It inspires everyone to work toward building a more positive society.”