Sarasota sunset
Searching for one thing and finding another

My wife and I had been in the Sarasota area for three days when I awoke one morning with the goal of photographing summer thunderstorms — particularly lightning.

After breakfast, we drove to St. Petersburg’s Fort De Soto State Park looking for an unobstructed view of developing storms.

Later, we saw the beginnings of a thunderstorm near Bradenton Beach, so we headed there. By the time we arrived, the storm was centered southeast of Longboat Key. We arrived at Longboat Key marina just as the storm hit full force. Once it was safe, I began taking photos — but I didn’t like any of the resulting pictures.

Frustrated, we headed back to Sarasota. We arrived in Lido Key Beach about an hour before sunset and noticed the light interacting with the remnants of another storm to the south.

Shortly after sunset, I caught the picture you see here.

The photo was shot with a Nikon D810 with a Nikon 14-24mm lens set at 24mm. The ISO was 100, aperture was f/16 and I took 5 bracketed shots ranging from .5 to 8 seconds. I processed the images in Photoshop, resulting in the final photograph.

Rob Rutan of Gainesville graduated from the University of Florida in 1977 with a bachelor of science degree in economics and a commission as a second lieutenant in the U.S. Air Force, where he served as a pilot and a flight instructor. He has been a pilot for United Airlines since 1991, currently based in Newark, New Jersey. He and his wife started GBW Photography five years ago.

See and read more at gbwphotography.com.

Do you have a photo for State of Wonder? Please email Jacki Levine at [email protected]. 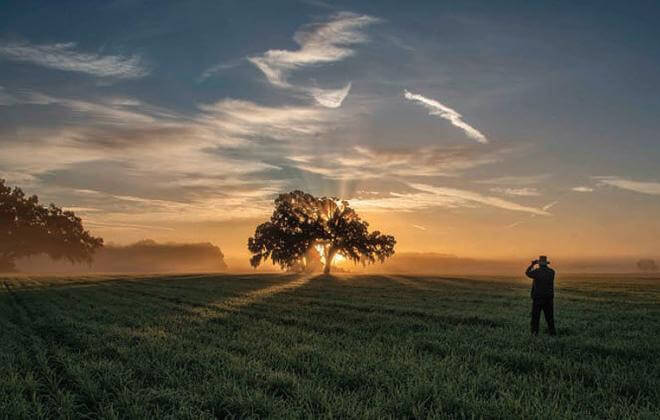 In The Early Morning Mist Awaiting the moment at Dennis Creek